I know that a LOT of you are emotionally triggered and enraged whenever I cite White women and Asian women as good examples of what to do IF you want to enjoy a good life as a married woman.

The very mention of Becky and Mei Ling [in the context of her marriages to Western White men] as good examples sends some of you into an absolute frenzy.

I saw many of the emotionally triggered and downright enraged comments that some of you made to the post White Women's "Wedding Season Of Life" Is From Ages 24-28 - If You Want A Good Married Life, You'll Get On This Schedule.

There's a reason why I don't use married Black women (whether African-American or foreign) as good examples of what to do for good results:

Because the majority of married, middle-class African-American women (and some foreign BW who are married to BM from their home cultures) have toxic, emotionally burdensome marriages that do very little or nothing to elevate their quality of life.

Of the married, middle-class African-American BW that I know well enough to have a good idea of some of the realities of their marriages with African-American men, I'd say that 95% of them are living like single mothers who just happen to be "officially" married. These women are carrying ALL the burdens of propping up what passes for marriage and family life in their lives.

Let me mention one "small" concrete example of what I'm talking about. A friend is married to a medical professional who has his own practice. She works full time as an attorney for a firm. Even though he's able to set and control his own hours every day, she always has to be the one to use up her sick days, vacation days, etc. on taking their children to doctor's appointments, teacher's conferences, report card pick-up day, etc. He never inconveniences himself to deal with anything related to their children or family life. Their children aren't small anymore. This overall pattern has been going on for many years.

This is why so many married, middle-class AABW (like the woman I know mentioned above) use such emotionally "heavy" terminology when speaking of marriage. Because for most married AABW (who are married to AABM), marriage is a drain and a B-U-R-D-E-N.

Even when their AABM husbands are affluent professionals, these AABW are expected to work full-time jobs and then come home and assume ALL the responsibility for child-rearing, cooking and cleaning. By contrast, the majority of the WM attorneys, judges and other professional WM I've known over the years hire maids for their [Becky and Mei Ling] wives.

Meanwhile, the typical middle-class married AABW who is married to a BM looks exhausted, or drained, or burdened. There's a heaviness to their lives that you can often see written all over their faces and how they walk. For many AABW wives, their marriages are not good marriages. All they have are "bragging rights" to be able to say that they're married. The end.

Which leads me to another observation I've made over the years of listening to older AABW's conversations: As quiet as it's kept, the lack of fulfillment in their marriages is one of the main unspoken reasons why so many older AABW never remarry after a divorce or their husband passes away.

Love and marriage are supposed to make a woman look good and radiate a vibe of contentment. Oh, like the photos you see of Eve with her British millionaire White husband [and with her four stepchildren from his previous marriage].

What's worst of all is that most AABW have normalized this mass dysfunction. So when you ask the typical married AABW for feedback, they start preaching from The Mammy Manual and The Handmaiden's Handbook. More than a few AABW have taken these mass cultural dysfunctions into their relationships with nonblack men. Which is why we're seeing an increase in the number of "swirl" baby mamas.

Elijah Muhammad taught his followers to study the successful man. Meaning the White man. I often use Mei Ling who dates and marries Western WM as a good example of WINNING because Mei Ling knows better than to do things like THIS (I'll note that one of these fools has a Nigerian-sounding name—foreign-origin BW are not immune to their particular versions of Mammyism): 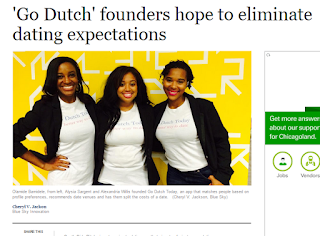 Vonnie has hosted an excellent Facebook discussion about this BW Getting It Twisted To Cater To Trifling BM Go Dutch app. [I'm still shaking my head about this madness.] 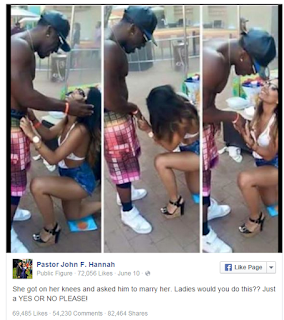 This is the kind of self-defeating craziness that you'll hear from far too many AABW. Nobody else supports or promotes these bizarre, STAY LOSING ideas and practices except AABW.

Other categories of women in the United States are WINNING. Study them. Read and follow The Rules. Go through the archives and learn from the examples cited in the Platinum Girl Celebrity Blog.