African-American Women Who March In Ferguson, Missouri Are Fools With A Death Wish

The primary reason civil rights protest marches worked in the 1950s and 1960s was because of the Cold War.
Since most African-Americans don’t bother to study our own history, we don’t understand the unromantic ingredients that helped make the civil rights movement successful. Most of us have no idea about the huge role the Cold War played in the movement’s success.

To put it plainly, Uncle Sam was locked in a serious competition with his European cousin Soviet Ivan. By the 1950s, both of them were competing for influence among the newly-independent nations of the third world. Uncle Sam was deeply afraid that large portions of the planet might join an alliance with Soviet Ivan. Every time photos and news film leaked out of Uncle Sam mistreating his disenfranchised AA citizens, Soviet Ivan would publicize this to people in third world countries. Soviet Ivan would say, “Look at how racist Uncle Sam is! Look at how badly he treats his own Black citizens! That’s how Uncle Sam will treat you if you join his alliance.”

And so, Uncle Sam felt some external pressure to make concessions to the civil right movement because failure to do so was seriously undermining his foreign policy goals. During the Cold War, Uncle Sam had pragmatic reasons to care about how foreigners felt about him. Uncle Sam only cared because he had a serious, equally armed enemy who was courting these foreigners.


Protest marches don’t work anymore because, after the fall of communism, the U.S. no longer has to compete with another hegemon for ideological influence in the 3rd world.
The Soviet Union collapsed over twenty years ago. There’s no Cold War. Uncle Sam has no reason to care about how he or his actions look to anybody.


There’s NO modern day equivalent of the Soviet Union to embarrass the U.S. by making an international “fuss” if American police are filmed shooting you in the head while you foolishly engage in a protest over the police killing of a Black male. “No 1 curr.” Today’s political and foreign policy context is totally different than the set of circumstances that enabled the victory of the civil rights movement. Which leads to my next point.
21st century/War On Terror-era American police departments use military-style weapons far beyond what they need, or what some veterans say the U.S. military would use when doing crowd control. The modern-day American police reportedly have more firepower and apparently less fire discipline than military crowd control. Even WM combat veterans are alarmed by this. 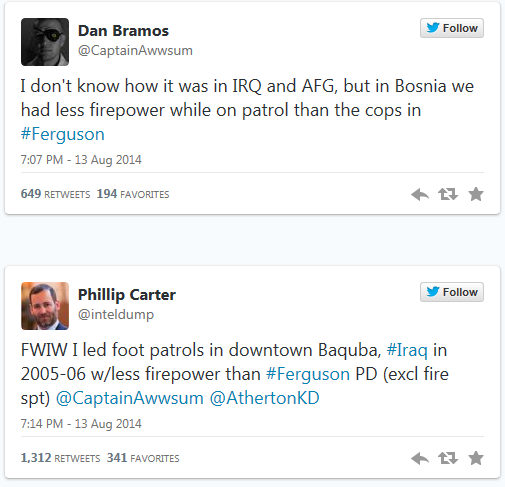 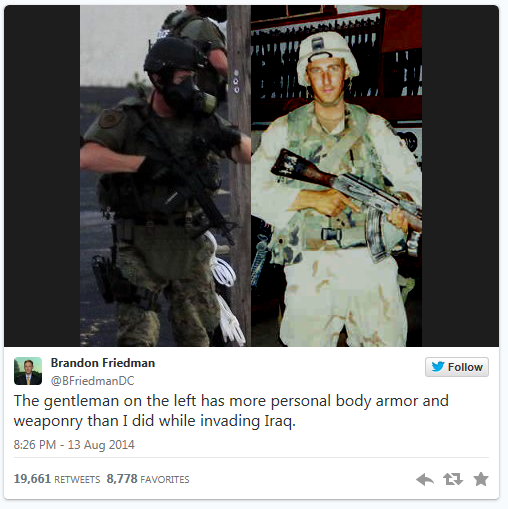 This is not a joke.

Know and trust that when you participate in one of these protests nowadays, you are literally putting your life on the line.

Imma say it the rough way: You’re a fool if you risk being maimed and killed for AA males who will go right back to calling you and other BW bitch, hoe, trick and THOT as soon as the protest is over. To the mammy mules who argue, “What if it was your [Black] husband, son, father, brother, uncle, nephew, etc. who was gunned down by the police?” My answer: I STILL would not participate in a protest nowadays. It would be up to the surviving MEN in my family to handle the family business regarding the killing of a male relative. It’s not my role as a woman to be on anybody’s front line serving as cannon fodder. It’s not a woman’s role to go into combat against males. 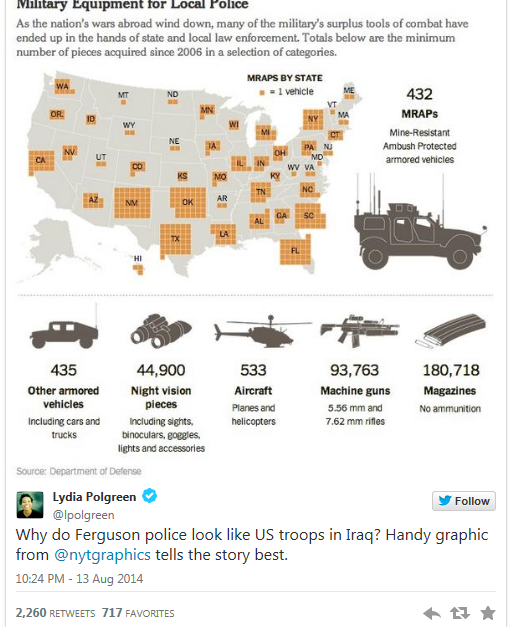 A woman shouldn't be placed in a position to be on the front lines of any conflict with men. That's not anything to applaud. And the foolish AA women who engage in that bring death and destruction down on their own heads. In more ways than the obvious ones. Recent online discussions have highlighted that particular angle.

I strongly urge readers to check out the following two recent Facebook posts from the Black Woman's Think Tank. Here's a partial quote from each of them. You really need to read them in full along with the comments.
Excerpt from THIS POST:

“Ladies. Just how far are YOU willing to go for the 'liberation' of the Black People? How much are YOU, personally, willing to give up to see the injustices against the Black Male, rectified? Are you willing to be beaten? Are you willing to be shot? Are you willing to DIE? And if you are, then what do you believe will happen AFTER he is liberated. Are you next in line? Will HE set YOU free? Will YOUR standing be any better than it is now? Has HE had a history of paying shit forward, and taking care of YOU, after you've taken care of HIM?
These are the types of questions you need to be willing to answer, before you go posting all this "Im am Trayvon' and "DONT SHOOT. I Want to Grow Up" stuff on your FB page and Avatar. You may want to ask yourself if YOU are ready to stand and FACE what you feel seeks to destroy Black Men, and are YOU willing to be taken out in the name of "The Revolution". Those of us who have a deeper understanding of certain kinds of energies, and have some understanding of Dark Wisdom, know how DANGEROUS it is to associate you or loved ones, image, with that of The Sacrifice - (something or someone that is used, slaughtered, compromised, negotiated, slain, abused, sold or imprisoned so that someone else can WIN!, benefit, avoid punishment or feed off of that energy). When you place YOUR image in the position of those who have already been Sacrificed, you are literally saying that YOU TOO, are willing to be used in that way.
In essence, THE VERY THING YOU BELIEVE YOU ARE PROTESTING AGAINST, YOU ARE ASKING FOR.
Many BW feel that is is their DUTY to rally, picket, protest, and lend their emotional, mental, economic and physical energies to the causes that seek to address the injustices black males experience that occur at the hands of outsiders. But since ONE SIDED LOYALTY is always at play in the BC, most BW will NEVER see their investment returned and will find that if and when THEY find themselves in a compromising position, they will NOT find their interests as vehemently defended as those they felt so compelled to rally for.
Breukelen Bleu and The Black Woman Think Tank., has a standing ‪#‎stayingoutofit policy when it comes to any of these very public battles to defend Black Manhood. . . .”

“According to statistics, 10.8% of Black Males are married to non-black partners and 19.7% cohabitate with non-black women. And while actual numbers are hard to find, anecdotal evidence of the ever increasing number of mixed raced children that result from these marriages, cohabitations and relationships equal to a good portion- lets saaaayyy....20% of black males, having children by non-black women.
Now, I'm no statistician, and my math is rudimentary, at best, but in the end, it's clear that at least 20% of Black Men have ties to women who are NOT African or Black American and at least 20% of them have children, households, marriages, economic, genetic, sexual or emotional ties-that-bind to non-black chics in some way, shape or form. So in essence 20% of Black Men have women who are NOT African or Black American, but who SHOULD have a vested interest in Black Male issues, concerns and causes, by default.
So, as part of The Black Woman Think Tank's ongoing study of the oppression of the Black Male, I'ma need to see those women accounted for - that 20% represented in Ferguson, MO, and at the next rally, protest and riot... in every city...for any reason... and every cause, held on the Black Male's behalf. I mean, this IS a team effort, after all, and since BLACK women are being made to feel obligated to get in 'the good fight', then Im'a need to see - standing RIGHT next to Al Sharpton and The NAACP - Becky, Mei Ling and Rosita... and I'ma need them all to be screaming "No Justice. No Peace", "DONT SHOOT!" and "Free Lil Boosie ", in whatever "native" tongue they used to prove to negroes just how 'exotic' and 'worthy' there were of his attention and time. Im'a need for Ms. Pakistan, Ms. Guatemala and Ms. Arabia to stand next to the hundreds of Sistas that show up to defend the honor and rights of Black Men every year. . .”

I totally agree with Breukelen Bleu about this issue. In the first post mentioned above, she  referenced two recent news stories of BW who were killed after attending anti-gun violence events in support of the [already dead] AA/Black community. With all due respect to the sincerity of these two deceased women, I believe they unwittingly and inadvertently offered themselves up as human sacrifices by participating in those type of Sista Soldier activities.

Self-actualizing women gravitate toward neighborhoods and collectives that offer greater physical safety and security. And away from physically dangerous Blackistans and Blackistanis. Including away from Blackistani rallies and meetings.

God respects free will, and so do I. It’s your life. You can risk it whenever and for whomever you wish. I’m just telling you why I won’t be out there protesting with you in defense of Black males. I value my life too much to risk it like that. AA males need to learn how to handle their own business for themselves. Or not. It’s on them.