It’s been fascinating to see the fallout from the latest publicized outrage committed against an African-American girl or woman. In the aftermath of the Spring Valley high school police assault on a Black girl student, large numbers of African-American (AA) Black women are finally letting themselves see what has always been right before our eyes the entire time:

Black men have been betraying and backstabbing Black women since before the WM (and the Arabs) ever came to Africa!

That All Black Problems Stem From Slavery/Colonialism narrative is very tired and frayed around the edges. At this point, I’m convinced that the Black world’s problems started WAY before the Arab and European invasions. BM have been betraying and exploiting BW from the very beginning. BM have been throwing BW under the bus from the very beginning. Long before White folks stepped foot into sub-Saharan Africa.

Even some Pan-African/Black Nationalist BM have started realizing this and describing the previously admired [Black] Moors as among the original “sell-outs.” Check out the commentary in this video starting at 4:34 into the video.

Money quotes from the video: 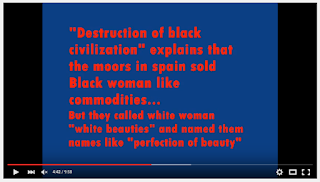 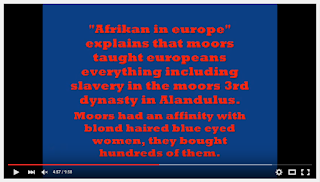 Nothing has changed in over 1,300+ years except that—due to the BWE movement’s victory—more AA Black women are willing to see reality regarding Black men’s mass, enduring, and permanent disloyalty and betrayal when it comes to Black women.

Another shift created by the BWE movement’s victory is that increasing numbers of AA women are walking away from “Blackistan” and Black men. And, most importantly, these AA women are taking their various resources (emotional, material, monetary, etc.) with them as they walk away.

Sensible AA women are closing their purses shut to BM’s projects. The one-sided loyalty tradition of AA women serving as unreciprocated safety nets and fallback plans for BM is coming to an end, praise God. And as a number of voices have predicted (Breukelen Bleu, myself, and others), the more AA women walk away the more we’ll hear some BM publicly claiming to love, respect and support BW.

It’s already happening. Here’s an example of one BM who reportedly was viciously denigrating BW just a short time ago, and now claims to have changed his tune, and is saying the following:

Dominique Huff, the ashy bastard who runs the "Dominique Huff Episodes" podcast of Atlanta GA decided to report this post as "Nudity" and had it taken down because he believed I was "Simping". (See evidence in the comments)
(Dominique Huff is a man)
Facebook complied and took my shit down.
They'll probably ban this page, disabling me on both pages.
However I'll do what the fuck I want as always and repost my commentary on Spring Valley High School, and if you wish to reshare it like last time, go for it. Just make sure you take a screenshot for yourself.
You coons are ugly, and should be yourselves for halloween. Go look in the mirror and yell "Happy Halloween" at yourself, Huffboy.
‪#‎AssaultAtSpringValleyHigh‬
‪#‎SayHerName‬
‪#‎StopTheDustiness‬

Geno Richardson commented on an article.

19 hrs ·
That's a good house slave.
Dude and his parents should be ashamed for cooning his ass off, in support of a racist jackass that employs violence against teenage girls.
If that was a black male he did that to, he would be calling for a Million Men to March their asses to Columbia.


What Mr. Richardson is saying in these two posts about the niglets who protested in support of the WM who brutalized a Black girl student happens to be correct. But even a stopped clock is factually correct twice a day. I was more interested in the reaction comments mentioned during a recent Facebook post.

Mardria Andrea Coleman It took Malcolm X over a decade to turn his thoughts and feelings around. No fucking way Geno did the 180 in a damn month.That nigga went BROKE and downtrodden, bit knew his only form of survival was BLACK WOMEN. If his life was on point hed be leading a tommy sotomayor group as we speak....And he MIGHT BE. We dont know these RA RA niggas online.

Karen Baker As I recall Ipersonally only saw his "I USED to bash black women" confessions only AFTER a few black women snatched his panties off in public with screenshots of his anti black women posts. This was around the time he had that "I got robbed" go fund me with that bullshit backstory.

Mardria Andrea Coleman Right, he got outed THEN owned it and used it as a sob story any damn way!

Abraham Coleman Hes a very peculiar fellow. Ive seen many of his posts via mutual friends and theres always something odd about his "love the black woman" missives like this. In my vast experiences, the extreme "love the sisters" types usually do the most dogging and using of the sisters when no one is watching. For lack of a better phrase, he seems falsely TOO pro black woman. Based on his own admissions hes been mistreated by women his entire life so what, other than using women, reason does he have to be stuck up the black womans ass all of a sudden?

Abraham Coleman Forgive me if I'm wrong but I have to call it as it appears. Ive read his "the world hates me" rants and theres always a good 200 black women there to lick his wounds. When was the last time he mentioned how hes benefitted black women in his personal dealings? Not to mention, he hated black women before but has he ever come forth with why exactly hes fallen madly in love now? Do women question his motives ever? Long ago my grandmother told me aint but two reasons a man gone stay corked up a womans ass: Either to put something in her or take something out of her. That seems to be this Geno character.

Abraham Coleman Black women tend to be allergic to motives. MOTIVES. For all the black woman divine diva goddess talk, theyre about as AWARE as a def squirrel among panthers. I see the grungiest men take full advantage of black women just online. How a bastard used to hate you, get your undying loyalty and you've no more than seen a main photo and some typical rants? Thats way too fucking easy!

Mardria Andrea Coleman EXACTLY!!!!!!! The minute I saw the proof of his hatred.... Done. He tried explaining to me, blaming others, pacifying etc.. Naw son. BYE!

Abraham Coleman Right. You dont spend 20+ years utterly disgusted by someone then magically do a complete shift over night like that when NOTHING in your life has changed other than he noticed how easy it is to get money and allegiance from the black woman. He's a great hustler. Thats about it. Aint no way a man walking this earth finds zero fault in women. Theyre full of shit too. Period

Ladies, don’t let any of these negroes’ empty talk fool you—keep heading for the exits!

Addendum - A commenter at For Black Women Only called it what it is: BM repeating things they’ve heard said at BWE sites is the new “mack” strategy for predatory so-called Good Black Men™:

Shelisa Howard-Martinez This is the new mack for so-called good black men. A couple of them are really trying to get as much mileage as they can by repeating stuff we've been saying to each other forever. I know of one who frequents this page because he is obsessed with empowered Black women. He blames them for his personal unhappiness but he knows he won't survive 5 minutes if he actually shared his true feelings and thoughts. So he uses multiple fb accounts to suit his purposes. One that is public and where he is the benign "good black man" and another that he uses to harass women.I caution against inviting-in or holding-up these types. If they were really serious about this, they would be preaching to their male peers and not trying to tell us that the sun is bright and that water is wet.