From today’s news in Chicago (this is an expressway that connects Chicago to many of its western suburbs, including several affluent ones such as Oak Park and River Forest):

I saw the following image on a Facebook page discussing these 2 shootings: 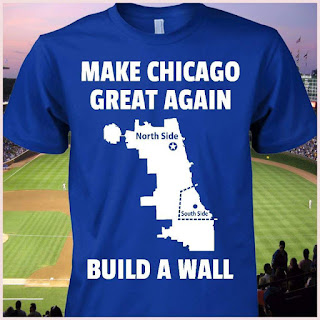 All of which reminded me of a post I did six years ago, Last Call To Evacuate Black Residential Areas Before The “Peace Walls” Go Up.

The Time To Get A Concealed Carry License Is NOW, Part 2

Woman rushes out of bed and opens fire at three armed home invaders
The footage, released by the Gwinnett County Police Department, shows the intruders busting through the front door and rummaging the house in the…
DAILYMAIL.CO.UK


Praise God, this woman knew what to do and had a gun available to save her own life against these 3 armed (with their guns drawn) negro male home invaders. Too bad she wasn't able to kill all of them, instead of just one of them. HERE'S a link to the story. And here's the security video from the home:

As I said in PART 1 of this series of posts:


. . . AA males hate BW as much as they hate the nonblack men who rule over them. No amount of BW’s mammy muling or Sista Soldiering for BM’s causes will ever change that.

Another (numerically MUCH larger) threat to consider is the growing number of AA males with dead eyes. I don’t know about you, but lately I’ve noticed that I’m seeing more and more random BM with dead eyes walking around in public. There’s a LOT of hate in those dead eyes.

And guess who those BM With Dead Eyes perceive as the easiest and most appropriate target for that hatred? If you’re savvy, you’ll get ready just in case those dead eyes decide to run up on you.  I hope I'm wrong about this. All I do know for sure is that I've correctly predicted a number of things that many other AA women didn't see coming until after-the-fact.


While even the more savvy and aware AA women in BWE circles aren’t taking as much action as they should to position themselves to survive and thrive, other folks are getting ready right now. Since I’ve been educating myself about guns and defensive shooting, I’ve been amazed at all the things that are out there.


Such as an entire magazine devoted to the responsible, practical and legal logistics of concealed carry.
Such as the NRA finding a BM sock puppet to promote their views among the African-American demographic. [Yeah, despite the article I linked to above, I think he’s a sockpuppet/Trojan horse. How often—if ever—do AA males create any sort of platform of their own? That was a rhetorical question—LOL!]
My point is this: Things are getting real in this Age of Economic Decline. Other folks in America (who are generally not AAs) are engaged in full spectrum preparation for whatever may come. If your jurisdiction allows for concealed carry licenses, I would urge you to get one. Now. Before your jurisdiction changes its mind and stops giving you that legal option. Even if you’re currently unsure about whether or not you’ll choose to own a firearm.
Don’t be like most of the Armed, Work At Responsible Jobs But Still Foolish AAs my firearm instructor knows: He knows a number of everyday, work-for-a-living AAs who own guns and carry concealed without having all the necessary licenses. Thereby setting themselves up to be arrested if they’re ever pulled over or caught with these guns. Typically, they have the guns because (like the instructor) many of them have had the experience of being robbed at gunpoint by young Black males. They have the guns, but they're not handling their business with the guns like responsible adults.
It’s better to have options and choices than to not have them.
There’s a whirlwind gathering around “mainstream” AA women, most of whom are sitting ducks (along with their helpless children).
You don’t want to be a sitting duck when the music stops and the funk gets uncut.

Labels: the time to get a concealed carry license is now

All sorts of permanent changes away from Business As Usual are in progress. Right now. Will you be ready for the emerging New Normal?

The Powers That Be are generally not going to tell you that we’ve arrived at Dystopia Now.

They’re not going to bring to your attention the fact that the true maps of various states and coastline areas have been transformed due to climate change. For example, they’re not going to tell you that when you factor in areas that are unavailable due to flooding, the state of Louisiana looks like this compared to the current map: 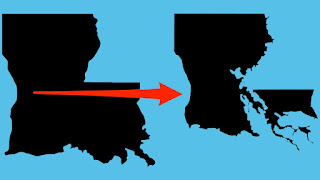 Nevertheless, there will be a time after the biggest changes have come and have become entrenched.

There will be a time after homeowners have had to evacuate their homes in various coastal areas for the last time. Because it will finally be clear to local governments and everybody else that it makes no sense to keep rebuilding and repairing homes in areas that will continue to flood each year.

There will be a time after local and federal governments stop subsidizing African-Americans’ penchant for out-of-wedlock childbearing. See the post Dystopia Now, Part 5: Brexit Is The Beginning of the End For African-American “Useless Eaters”

There will be a time after all social and legal traces of the African-American Civil Rights Movement have been erased.

There will be a time after the “AIDS faces” make a comeback. See the posts Dystopia Now, Part 4: Get Away From Atlanta & Keep Your Daughters Away From Historically Black Colleges & Universities and I Agree With Brandy McCarley— If You Value Your Health As A Black Woman, You Will Too

There will be a time after the sudden influx of Mexicans fleeing narco wars and a cartel-induced collapse of the Mexican government. See the post Geostrategy Nerd: What Would Mexico's Sudden Collapse Mean for YOUR Prospects in the U.S.?

There will be a time after all of the above.

You can position yourself to not only survive the emerging changes but to thrive while these changes become the New Normal. In THIS previous post, I mentioned that preparedness is the next step after the BWE basics (along with various resources to help you prepare). I also mentioned the History Channel docudrama “After Armageddon” that aired a few years back. Here’s the entire docudrama:

I would suggest that you pay close attention to the “25 years later” final section that begins at 3:22 in this clip from the last section of the docudrama: