African-American Women: Here's Some Of The Fruit That You've Earned With Your Knee-Jerk, Rabid Support of “12 Years a Slave,” Part 3

I'll keep this relatively short because the point is [should be] self-evident. {smile}

A lot of y'all got mad when I originally questioned your knee-jerk, rabid, UN-reciprocated crusades in support of 12 Years a Slave.

I've been keeping track of the many bitter fruits y'all are going to reap as a result of this entrenched knee-jerk behavior pattern of constantly throwing on your Superwoman cape in support of any and all random Black-skinned faces. All without ever asking the simple questions of:

Here's a photo of  Nigerian-British actor David Oyelowo and his wife: 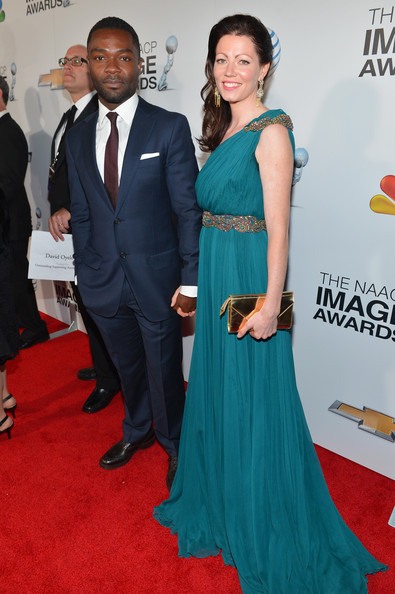 Right. So, two foreign Blacks (one of whom has a White wife) have been cast to play Coretta Scott King and Dr. King in a biopic about Dr. King. Right.

Before some of y'all try to draw a [false] distinction, keep in mind that the AAs who participated in (and/or accepted) these casting decisions with the upcoming Selma flick only did the SAME thing that a lot of y'all African-American women consumers did with your rabid, knee-jerk support of 12 Years a Slave.

Namely, all of these decisions were made by African-Americans who were so fixated on various emotional considerations (oh, such as desperately looking for validation of dark-skinned beauty, showcasing White women's cruelty, etc.) that they didn't notice that they're economically cutting their own throats in the long-run.

You teach people how to treat you. The same applies to consumer behavior. Y'all taught Hollywood (and the AA slaves looking to catch a crumb in Hollywood) that the winning equation when it comes to movies about AA history is to cast foreign Black actors as AA historical figures.

Since you've shown that you're comfortable with financially supporting being replaced by foreign Blacks, you will be replaced. Across the board.

Regardless of whatever you thought you were doing by blindly running out to support this movie, this is the REAL message you sent with your rabid support of 12 Years a Slave.

Bonus Commentary. I've had multiple email conversations about the dynamics underlying all of this. Here's part of what I've said during several of these conversations:

AA women's fanatical caping for Lupita is a microcosm of a larger dynamic:

(1) BM happily accept gullible AA women's support and then kick AA women in the teeth (and to the curb) when these BM get where they think they're going.

(2) Latinos happily accepted gullible AAs' political support; and then kicked AAs in the teeth (and to the curb) when they no longer needed our support for their illegal immigration (now that they've overtaken AAs as the largest minority demographic).

(3) Foreign Blacks are mid-way through this same trajectory. Once foreign Blacks complete the process of replacing AAs in American universities, the American entertainment biz, and so on, the bulk of them will totally kick AAs in the teeth (and kick us to the curb). It's like Lucy and Charlie Brown and the football. {rhetorical question} I wonder how many times do AA women have to see this pattern played out? [A savvy former blog reader replied that AA women will have to repeat this lesson until they finally learn from it, and stop engaging in knee-jerk muling for other people.]