I Agree With Brandy McCarley — If You Value Your Health As A Black Woman, You Will Too

Since it’s impossible to talk about these matters without listing one’s “I support justice for gays and lesbians” street cred, here are some links to posts where I’ve denounced African-Americans’ mass bigotry against gays and lesbians.

The Catalog Of Ethical Insanity, Part 1: Down Low Detectives & Down Low Enablers

Home Is Where The Hate Is, Part 1: Black Religious-Inspired Bigotry In Place of Godliness

I also mention this fake-religious based bigotry against gays and lesbians on page 44 of my book.

I discussed gay activism-related issues in these posts:

“And The Band Played On,” 21st Century Edition—TheTriumph of Sexual Liberation Ideology Over Common Sense & Sometimes OverLife Itself

I was one of those rare straight African-Americans (especially rare for a Muslim Black Nationalist, which is what I was at that point in time) who spoke out in favor of justice for lesbians and gays long before it became acceptable to do so. I spoke out—and had lots of silly Black folks looking at me cross-eyed—back in the 1980s and early 1990s. During the AIDs plague. So, for those straight African-American Black women (AABW) who are addicted to caping for gays, lesbians and trans-individuals, please try to refrain from accusing me of anti-gay bigotry.

African-American Women: They Hate You BECAUSE You Cape For Them

At this point, these sexual minority movements are about grabbing the political power and influence necessary to shove active approval of homosexuality down everybody else’s throat. And since African-American Black women (AABW) are totally unprotected by the straight males of our ethnic group, homosexual and bisexual males—just like everybody else—feel comfy and cozy while disrespecting and attacking us. We’re the safest scapegoat for them to use for venting their frustrations.

Ladies, please take a look at the comments to THIS Facebook post by a self-described “openly bisexual” Black man named Siete Saudades. I originally found his Facebook page by following links. From what I’ve read so far, he supports justice for Black women regarding various issues.

But—and unfortunately there’s always a “but” when it comes to so-called allies of Black women—in the above-referenced Facebook thread he insults a BW reader named Brandy McCarley (first by calling her old enough to be his mother) when she says “I personally don’t want any man that has slept with other men.”

This mess is what he and some of the other commenters said in response to her comment: 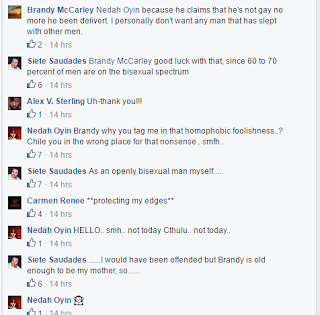 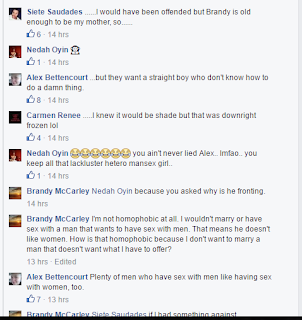 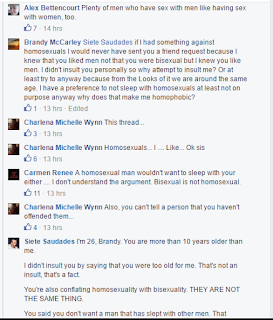 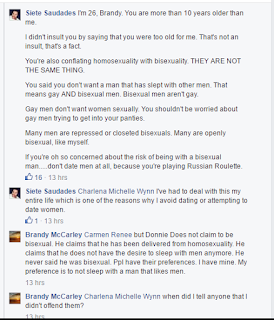 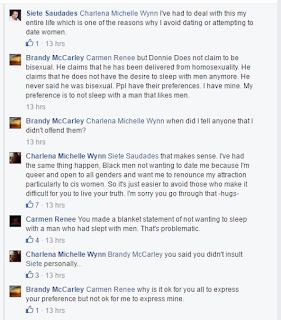 According to Siete Saudades and his cyber-gang of fans, it’s no longer enough for you to live and let others live. Many of these people want to force the rest of us to actively cheerlead their various sexual feelings, orientations and identities. While they simultaneously deny YOU the right to YOUR feelings, orientation and preferences. The way they ganged up on and denied Brandy McCarley her right to HER feelings and dating preferences.

According to Siete Saudades and his fans, heterosexual Black women are NOT entitled to screen Men Who Have Sex With Men out of their dating pools.

THIS is the message these people conveyed when they attacked Brandy McCarley in that thread. Everybody has a right to their dating and mating preferences except BW.

Even when—let’s be REAL about this—dating and sexing Black Men Who Have Sex With Men is extremely dangerous to one’s health because of the increased odds of sexing a HIV-infected person.

You can read the CDC reports for yourself. HIV is not a joke. A lot of you young’uns have a blasé attitude about HIV and AIDS because of modern medications. I don’t. I’m proud to say that I am old enough to be Siete Saudades’ mother. I lived through the plague years of the 1980s and 1990s. As I said in another post from 2009:

It's been disturbing to see that many gay Black male activists don't seem to comprehend the ethical insanity of down low gay men deceiving women, using them as involuntary cover stories, and thereby endangering these women's lives without their knowledge. Let's get real: Most women across the board are not going to insist upon their husbands wearing condoms. Period. The only thing many gay Black male activists are focused on is ducking and dodging having any level of accountability for this plague being assigned to gay/bisexual Black men.

I've read all sorts of utterly irresponsible statements from gay Black male commenters and activists. I'll just mention one such activist named Keith Boykin. I read his book Beyond The Down Low: Sex, Lies, and Denial in Black America. His book is basically several hundred pages of "Don't blame us gay/bisexual Black men for being involved in spreading this plague." Read the following essay to get the flavor of the book. 10 Things You Should Know About the DL

I noted the following in the post Dystopia Now,Part 4: Get Away From Atlanta & Keep Your Daughters Away From Historically Black Colleges & Universities:

I was in high school and college during the 1980s.

I saw AIDS wipe out an entire generation of gay men of all races and those straight African-Americans (and others) who got caught up in that plague.

I saw the 1994 [M]Essence cover story featuring Rae Lewis-Thornton’s struggle with HIV/AIDS. That poor woman has been suffering ever since.

I saw how Blacks had NO organized, effective, or even honest mass response to the AIDS plague.

I saw how Black activists were more interested in passively discussing conspiracy theories than in mobilizing to (1) help afflicted Black folks or (2) protesting to speed up the search for medication and a cure.

During the 1980s and 1990s, I saw how White gay men (such as playwright and activist Larry Kramer) in groups such as ACT-UP were the only demographic consistently speaking out and protesting to speed up the medical research needed to invent HIV/AIDS medications.

I can’t emphasize enough that  Black folks living with HIV/AIDS (including straight Blacks) owe the (mostly White) gays who participated in ACT-UP a great debt. These medications wouldn't have been as available without their efforts. And I don't recall seeing or hearing of many Black gays participating in those initiatives.

I remember what friends and I at the time referred to as the “AIDS faces” [facial lipoatrophy] and the wasted away-scarecrow-like “AIDS look” that many of the infected people had during that era. 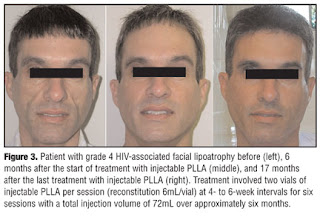 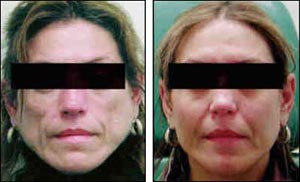 All of this was before there were the modern “facial filler” cosmetic surgeries and modern medications that help HIV/AIDS-infected persons maintain a more or less normal facial appearance.

Medical care is expensive. During an era of economic decline, many medications and procedures become too expensive for the average person.

Unfortunately, I expect those “AIDS faces” to make a comeback in the not-too-distant future. If you’re wise, you’ll take preventive action right now to make sure you and your loved ones never have “AIDS faces.”

Ladies, anybody who’s telling you that you don’t have the right to screen any particular category of men out of your personal dating pool is NOT any kind of ally or friend to you. They’re an enemy. An enemy who’s trying to browbeat you into putting somebody’s else’s interests over your own. Tune them out.

The life you save by ignoring these people, their ideology and their attempts to pressure you might be your own.
Posted by Khadija at 8/13/2016 01:22:00 PM